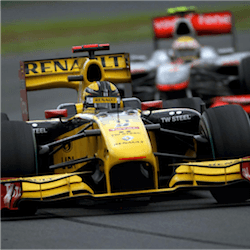 Robert Kubica could be making his return to Formula 1 by the end of the year. The Polish driver begun F1 testing in Hungary this week, six years after a rally crash ended his Grand Prix career prematurely. The accident in 2011 resulted in Kubica partially severing his right for forearm and forcing him to withdraw from professional racing.

Now it seems he is back and determined to get back into the swing of things. The 32-year-old pulled onto the Hungarian circuit in Budapest for the first time in a Renault 2017 car. Kubica had previously conducted tests in older machines but this was the first time the Pole got a feel of the current setup. Racing with BMW Sauber in 2008, Kubica hold the honour of being a previous race winner. After his accident, he vowed he would only return to Formula One as a drive and not a guest.

On Tuesday this week, Kubica passed the mandatory extraction test on the car. This involved showing that he could extract himself from the car within five seconds and replace the steering wheel inside of 10 seconds. In a brief statement before the test, Kubica told the press that he wanted to have a comfortable feeling with the car and at the same time wanted the team to be happy with his performance. He went on to say that is was not about lap times and pace, rather feedback and commitment to the team.

Since showing off his skills in the 2012 Renault car kitted out with demonstration tires and a V8 engine, there has been a lot of speculation that Kubica could be making his return sooner rather than later. Renault’s managing director, Cyril Abiteboul said that Kubica is still very quick and consistent on the track. More importantly though, the team feels that he still has the enthusiasm and drive from his former years.

Kubica could have his shot at the end of the season. A spot could open up on the team if Britain’s Jolyon Palmer continues his poor on-track performance. Palmer is currently one of only two drivers who have yet to score a single point in the current Formula 1 season. Meanwhile Kubica has plenty of support behind him. In a press statement, Lewis Hamilton said that Robert is one of the quickest drivers he has ever raced against. He believes that Kubica has raw talent, which not a lot of drivers have at this level.