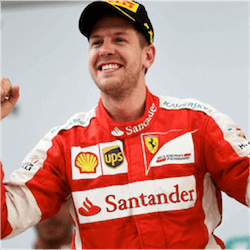 Sebastian Vettel has managed to extend his Formula 1 World Championship lead with another drama-filled victory at the Hungarian Grand Prix. The result means that Vettel will take a healthy 14-point lead over Lewis Hamilton ahead of the summer break. The race was fraught with drama from the onset. After starting the race in pole position, Vettel spent most of the race battling a steering issue and ultimately had to thank teammate Kimi Raikkonen for allowing him to stay ahead.

Speaking to the press, Vettel said that something had gone wrong. The steering started to go sideways on him, forcing him to slow down and focus on keeping the car on the road. As Vettel’s pace slowed, a frustrated Raikkonen was not able to persuade the Ferrari team to allow him to overtake the frontrunner. Meanwhile, Lewis Hamilton was battling his own problems. A radio malfunction prevented him from being able to communicate with his team directly after each pit-stop.

By the time Bottas allowed Hamilton through to attack the Ferrari’s, he had already lost a good deal of tire life. Hamilton immediately caught up with the Ferrari train but was not able to overtake Raikkonen around the narrow Hungarian circuit. When Hamilton did finally launch a full-on assault on Raikkonen, he got caught up in the dirty air behind the Ferrari and almost ran off the track. With no way through, Hamilton slowed down significantly allowing teammate Valeteri Bottas through to take third.

A Controversial Decision by Hamilton

Hamilton crossed the line just ahead of Red Bull’s Max Verstappen. With politics deciding the Ferrari’s finishing order, the decision for Hamilton to give up his place to Bottas has been hotly debated, especially if it costs Hamilton a fourth World Title. Speaking to the press, Mercedes team boss, Toto Wolff defended the decision. He said it was this kind of spirit that made them win three championships and it will certainly make them win more.

Fourth place Max Verstappen was involved in perhaps the most controversial incident of the race. Verstappen collided with Red Bull teammate Daniel Riccardo on the first lap, ending the Australian’s race before it had even begun. Riccarido lashed out, describing Verstappen’s move as amateur. The race stewards were as severe, dolling out a 10-second penalty to the young driver. Verstappen later made a public apology to Riccardo who many thought could have been a challenger in Budapest.