Spanish Grand Prix in May 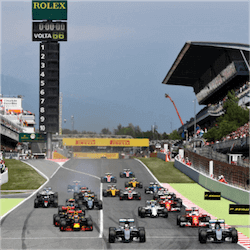 Spanish Grand Prix in Barcelona in May

New Zealand Formula 1 fans have an exciting year ahead of them, kicking off in a fortnight with the Australian Grand Prix in Melbourne on 26 March. Many will be keen to take a punt on the Spanish Grand Prix on 14 May as well; it may not be among the most famous races in motorsport, but it’s certainly one of the oldest.

The Spanish Grand Prix was first held in 1913, although not under the international Grand Prix rules of the time. The first race was held under touring car rules on a 300-kilometre road circuit near Madrid.

Interrupted by World War I, the race returned as a true Grand Prix in the 1920s, only to be abandoned again during the Spanish Civil War that began in 1935. It was only revived, now classed as a Formula 1 event, in 1968, and spent decades migrating around a variety of Spanish racetracks.

Since 1991, however, the Spanish Grand Prix has enjoyed a permanent home at the Circuit de Barcelona-Catalunya, a 4.655km track in the Catalonian capital with 16 turns and two long straights. The Grand Prix lap record of 1m, 21.670s was set by Finnish racing star Kimi Raikkonen in a Ferrari, when he won the event in 2008.

Raikkonen had won the Spanish Grand Prix once before, driving for the West McLaren Mercedes team in 2005. His 2008 win remains his only victory in Barcelona for Ferrari.

Although he managed a third and a second respectively in 2012 and 2013, driving for the Lotus F1 team, since his return to Scuderia Ferrari in 2014, his best result in Barcelona has been last year’s second place. He finished 0.616s behind Dutchman Max Verstappen, and almost five seconds ahead of his German teammate, Sebastian Vettel.

However, in Formula 1 testing on the Circuit de Barcelona-Catalunya last week, Raikkonen and Vettel proved that the Ferrari team is going to be hard to beat in May. Between them, they posted the best and third-best lap times, although Raikkonen finished the victor, in a blistering 1m, 18.634s.

That was half-a-second faster than any time posted by the Mercedes drivers, Valtteri Bottas and Lewis Hamilton, who finished fourth and fifth respectively in the day’s standings. Verstappen, still driving for Red Bull-TAG Heuer, finished second.