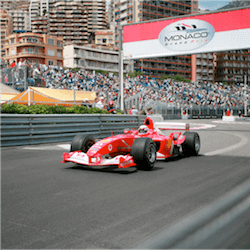 The Grand Prix Automobile de Monaco (Monaco Grand Prix) will celebrate its 75th edition on Thursday the 25th of May. Starting on the Thursday afternoon, the Grand Prix will run during Ascension Weekend, hosting the 6th round of the 2017 FIA Formula 1 World Championships. With the Australian and the Chinese Grand Prix races already done and dusted, Sebastian Vettel holds the top spot with 43 points after claiming the first race win of the season. Lewis Hamilton went on to win the Chinese Grand Prix, which places him just behind Vettel on equal points but with a slower lap time.

While the season is set to mature and the driver standings destined to shuffle, we can see that Dutch driver Max Verstappen is holding onto third place while Valtteri Bottas sits two points behind him. Looking forward, one of the jewels of the Formula 1 championships is undoubtedly the Monaco Grand Prix. Every season, Monaco pushes the best drivers in the world to their limits and beyond. It is a physically demanding race on both drivers and cars which makes it one of most exciting races of the year.

The Monaco race not only brings exceptional racing but also exceptional beauty. Tucked away between the sea and the mountains, the Monaco track is incomparable with its breath taking background and historical prestige. The event of the year brings together all the ingredients of a top-class race including glamour, speed, skill and glory.

Having won the Monaco Grand Prix for the second time in 2016, Lewis Hamilton will want to extend his winning record at the 962nd Grand Prix on The Rock. If the three times World Champion manages to pull off a win in May, he will join the ranks of racing greats who have all racked up three wins in Monaco including former teammate Nico Rosenberg as well as Jackie Steward and Stirling Moss.

The demanding Monaco track will highlight the any mistakes made by the drivers as they get to grips with the changes to the 2017 controls and cars. With wider tires and a wider chassis, the 2017 single-seater cars are expected to be noticeably quicker around the track. The gain in speed is predicted to cut off at least five seconds of each lap. The Monaco Grand Prix is set to be an absolute belter where even the slightest mistake could cost a driver their championship title.