Update on the F1 Season and the Spanish Grand Prix 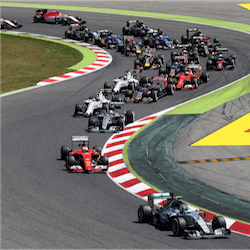 Looking Towards the Spanish Grand Prix

Punters and F1 enthusiasts will be hard pressed to find a race more exciting than the one that took place in Bahrain this past weekend. It has certainly been the highlight of the F1 season and a complete shocker to all of those who were betting on Hamilton to take the win. It was all going to plan for Mercedes until Hamilton was penalised with a five second penalty for driving slowly on pit entry. Hamilton re-joined the race in third place, but even with teammate Valtteri Bottas moving aside, Hamilton was not able to catch up with Sebastian Vettel.

Going into the race, Hamilton and Vettel were locked at the top of the leader board. Now Vettel finds himself seven points clear in the championship. However unjustified the penalty and race outcome was, the fact is, the race is done and we have forward. So what is up on the horizon? While Russia might be up next, it really comes down to the Spanish Grand Prix to separate the men from the boys.

No Room for Error

Previously known as the Circuit de Catalunya, the Barcelona track has been in circulation since 1991. This year will be the 25th F1 Grand Prix in Barcelona and one that will certainly be worth watching. Of all the tracks in the championship, Barcelona is perhaps the most familiar. After all, many of the teams conduct extensive testing on the track throughout the year. With all the teams having a good knowledge of the track layout, it all comes down to technical skill and concentration.

Familiarly aside, the Barcelona circuit is one of the most physically and mechanically challenging tracks in Formula 1. The mix of low and high-speed corners combined with the bumpy track surface create the perfect storm for the drivers and the cars. Tyre wear is a major factor in Barcelona. The strong and irregular winds can also play a major role on how the cars perform. Getting the right setup is crucial for teams. As it stands, Sebastian Vettel holds the top spot on in the driver’s championship on 68 points. Lewis Hamilton is in second place on 61 while his teammate Valtteri Bottas clings onto third with 38 points, just four points ahead of Kimi Räikkönen.