Update On Schumacher Ahead Of Netflix Doccie 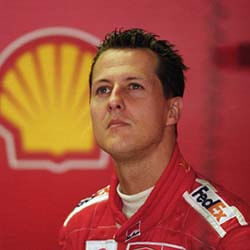 Formula 1 racing legend Michael Schumacher’s wife has released a rare update regarding his health ahead of an upcoming Netflix documentary due for release in September. Schumacher hasn’t been seen in public since the fateful skiing accident that saw him fall and hit his head back in 2013.

A statement recently issued by the 52-year-old’s wife, Corrine, is the first since an update issued for the star’s 50th birthday in 2019. In the latest update, Corrine Schumacher describes her husband as being mentally exceptionally strong and someone who shows that strength to her every day. The statement also once again refers to the fact that everything medically possible is being done in order to support the former race car driver.

While this week is the 30-year anniversary of Michael Schumacher’s maiden Formula One appearance in Belgium, it is also about to mark his son Mick’s debut stunt at the famous circuit on the weekend.

Schumacher Jr. spoke this week about the excitement in the run up to his big appearance on the weekend. Being able to drive around the same iconic track as his famous father is a super special moment both for him personally, as well as for the rest of the family, said the younger Schumacher earlier this week.

The Netflix documentary, simply titled “Schumacher” features several interviews with the F1 legend’s family and friends. His state of health however remains very much under wraps, as has been the case for the past 6 years.