Valterri Bottas signs with Mercedes for 2018 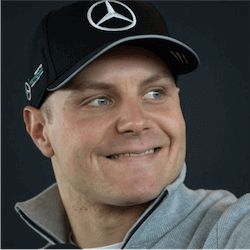 Bottas Signs with Mercedes for 2018

There is good news for Mercedes fans. Valtteri Bottas will be partnering with Lewis Hamilton for another year with Mercedes. The new contract, announced on Thursday, allows the highly successful Formula 1 team to keep all their options open for the 2019 season. Bottas’s one-year deal with Mercedes was expected and anticipated after he racked up two victories this season and has formed a seemingly harmonious partnership with Lewis Hamilton.

28-year-old Bottas, joined Mercedes in January this year on a one-year contract. He came in to the team to replace retired world champion Nico Rosberg. The relationship between Rosberg and Hamilton had deteriorated towards the end of last year with a fierce rivalry between the two drivers creating issues in the team. After stepping into the role, Bottas has become an asset for Mercedes. Bottas is currently 3rd in the drivers’ standings, just behind teammate Hamilton and Ferrari’s Sebastian Vettel.

The Finn has had a good year so far with victories in both Russia and Austria; the first of his Formula 1 career. He has also racked up two pole positions and nine podium places this season, results not seen in his four years in F1 when he was racing with Williams. Speaking to the press, Mercedes motor sport chief, Toto Wolff said that Bottas’s overall performance and his upward trajectory made it a no-brainer for the team to continue with him next season.

Hamilton’s contract also runs until the end of 2018, giving Mercedes the ability to keep their options open for 2019. As it stands, both Max Verstappen and Red Bull driver Danial Ricciardo are also holding contracts that end after 2018. Meanwhile Ferrari have already extended Vettel’s contract until the end of 2020 with Raikkonen signed on for another year.

When the press caught up with Hamilton last month, he said that he did plan to extend his contract, but there was no hurry for him. According to Wolff, the dynamics between Hamilton and Bottas played a major part of the team’s decision to extend Botta’s contract for another year. He said that for the team, a bonus factor is the respect and sportsmanship that has grown between the two drivers. He went on to say that the chemistry between the two is working well and this is what the team needs to take the fight to their competitors.