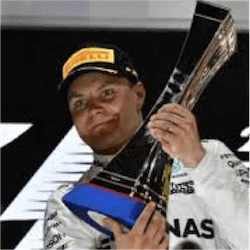 Bottas Closes Out the F1 Season with a Win

After a gripping Formula One season and a race for the title, the Abu Dhabi Grand Prix closed out the campaign with little or no fanfare. Indeed, the title race was over a few weeks ago and Abu Dhabi was more of an obligatory ending for many teams. For Valtteri Bottas though, it was a chance to prove his worth to his team and the Formula One Community.

Starting at pole position, Bottas held off his Mercedes teammate to claim a much-needed win. Having suffered from bad run in the latter half of the season, Bottas needed to prove to Mercedes that they made the right decision in signing him for next year. It also gave Mercedes a morale boost with a one-two over Ferrari.

Hamilton had hopes of finishing the season on a high note, but crashed the Brazil qualifiers and placed second in the final race. While he was not able to claim any more wins, he did equal the record with Michael Schumacher and Manuel Fangio as the only drivers to score points in every race in a championship winning year.

With both Bottas and Hamilton in evenly matched cars, Hamilton was able to stay up front with the Fin but not find the required speed advantage to pass. It is an issue that has cropped up this season mainly due to the aero-focused regulations. Leading off the grid, Bottas maintained control throughout the race and stayed in front after the one and only pit stop on the race. While Hamilton pushed him to the edge, he simply could not find a way around.

The Mercedes pair were essentially in a race by themselves with Ferrari’s Sebastian Vettel finishing a full 19 seconds behind them. As for Mercedes, they will be pleased with their performance this season. The team won their fourth constructors championship with a total of 12 wins which included four one-two finishes. Ultimately, they proved that their development of a F1 car was strong to the end.

Meanwhile, the battle for sixth in the constructor’s championship between Toro Rosso, Renault and Hass, ended up going the way of Renault. A sixth place by Nico Hulkenberg was enough to overtake Toro Rosso. Daniel Ricciardo had to retire on lap 22 after suffering from hydraulic failure while Ferrari’s Kimi Raikkonen, who was sitting seven points behind Ricciardo, managed to take fourth place and jump his rival into fourth in championship. Max Verstappen came in fifth followed by Hulkenberg, then the Force India pair of Sergio Pérez and Esteban Ocon.