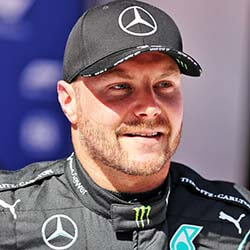 The end of the current Formula One season will also mark the end of an era for Valtteri Bottas, with the F1 driver set to leave Mercedes for Alpha Romeo next year. He will be replacing Kimi Raikkonen, who announced his upcoming retirement earlier this month.

Bottas’ parting with Mercedes marks a bitter-sweet time for the driving ace, whose career with the brand never really got off to any sort of start since joining the team back in 2017. While he replaced former world champion Nico Rosberg, he never managed to completely step into his predecessor’s shoes. He last year September claimed the last of a total of nine career victories when he won the Russian GP – thereby finally ending an exhausting 20-race losing streak.

The Fin is now nearly 100 points behind teammate Lewis Hamilton after 13 races competed, and has said he’s looking forward to the opportunity of joining Alfa Romeo while hoping to help the team make its way up the grid.

As for his relationship with F1 champion Lewis Hamilton, Bottas said it has been only a privilege to work alongside the Brit. This is of course a stance worlds apart from the awry relationship Hamilton shared with previous teammate Nico Rosberg. The latter’s departure drew a collective sigh of relief from team and fans alike after the pair made their feud public for all of two seasons.