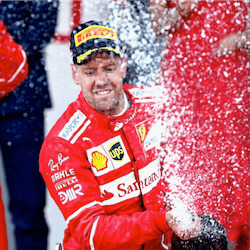 Sebastian Vettel extended his championship lead over Lewis Hamilton with a win at the 85th Monaco Grand Prix. Vettel led Ferrari teammate Kimi Raikkonen after passing the fin in the mandatory pit stop. Hamilton, who started 13th on the Grid finished in 7th place. The slightly low-key race was given a bit of excitement when Jenson Button was involved in a crash on his once-off return to F1. The crash locked up the field and caused a series of collisions at the back of the pack.

Kimi Raikkonen managed to grab his first pole position in nine years after Vettel made a few mistakes in the top-10 qualifier on Saturday. The Finn used his advantage to hold an early lead ahead of his teammate at the first corner. The two Ferraris slowly edged away from Valtteri Bottas as well as Daniel Riccardo and Max Verstappen. The Monaco race featured a single pit stop, leaving people to speculate if Ferrari would find a way for Vettel to take the lead.

The way things ended up, it seemed as if Ferrari had done exactly that. Raikkonen pulled into the pit stop on lap 34, emerging behind a few slower cars that he had to lap. Vettel used this opportunity to gain time with a series of fast laps. When Vettel went into his pit stop 5 laps later, he emerged a full 2 seconds ahead of Raikkonen. Vettel continued to pull away from his teammate, eventually building a 10 second lead and an easy cruise to his third win of the year.

Speaking about the pit stop decision, Ferrari said that Raikkonen’s pit stop was pre-planned and that Vettel had his delayed to avoid being passed by Daniel Riccardo who was delaying his own pit stop at the time. Meanwhile, Mercedes knew they were going to struggle to make up ground with Hamilton after he started in 13th due to a messy qualifying session.

The team decided to run him long, hoping that the clear track would allow him to gain speed while cars pulled into their respective pit stops. Hamilton continued to run until lap 46 before pulling in while sitting in sixth position. He emerged from the pit stop behind Toro Rosso’s Carlos Sainz. Hamilton was unable to pass the Spaniard and finished in 7th.