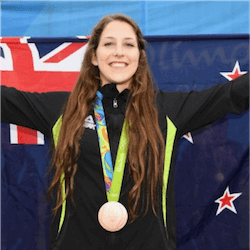 We brought you the best athletes in New Zealand, so now it’s time to take a look at the top achievers of the last year.

There have been many great sporting achievements won by New Zealand athletes this year. A few of those athletes have made exceptional contributions to their respective sports as well as to New Zealand’s international reputation as a producer of fantastic athletic talent.

One of those athletes is No 1 ranked female professional golfer, Lydia Ko. This Korean born athlete has had an exceptional year in sport.

She was named one of Time magazine’s 100 most influential people, just 1 day before her 17th birthday. She has to date, at the age of 19, won 14 LPGA tour titles and just needs 10 more points to qualify for the PGA hall of fame.

Lisa Carrington is an Olympic level canoer. She has won the gold at the 2016 and 2012 Olympics as well as gold at the 2011 Canoe Sprint Wold Championships. She hails from Tauranga in New Zealand.

She has won a total of 7 gold medals, one silver and two bronze. She has also won various accolades. She was named the 2012 Maori Sportsperson of the year, a member of the New Zealand Order of Merit in 2013.

Sailors Peter Burling and Blair Tuke are two star athletes who have performed ridiculously well in every regatta they have taken part in.

To date they have won every regatta they have taken part in in a four year cycle. Considering all the potential variables from the condition of the ocean to unpredictable weather patterns, this is quite a feat. They won their Olympic race by an insane 43 point margin.

Another star rower from Tauranga is Mahe Drysdale. He won gold at both the 2012 and 2016 Olympics as well as a hard fought bronze at the Beijing Olympics in 2008. He has won a total of 7 gold medals, three silver medals and one bronze.

Mahe has also won the Young Alumnus of the Year from the University of Auckland in 2007. He also won the New Zealand order of Merit in 2009.

Finally we have one of the most decorated athletes New Zealand has ever produced, Hamish Bond and Eric Murray. This rowing team has won 10 gold medals in their pairs rowing career including 2012 and 2016 Olympic gold medals.

With these amazing athletes leading the charge for New Zealand’s sporting achievements in 2017, it can only be a fantastic year for Kiwi sport.