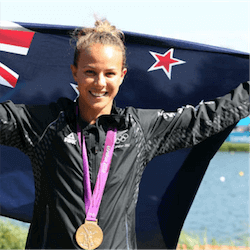 After being named the 2016 sportswoman of the year, New Zealand gold medal canoeist Lisa Carrington also picked up the prestigious supreme Halberg award at the 54th Annual Halberg Awards. Carrington beat out an extremely strong field at the award ceremony, which again highlighted her contribution to New Zealand sport.

At the Rio Olympics in Brazil, Lisa won a gold medal in the K1 200-meter competition and bronze in the K1 500-meter competition. By doing so, she became the first New Zealand female athlete to pick up multiple medals at the Olympics. The 27-year-old canoeist now becomes the third woman to win the top Halberg award in the past decade. She takes her place alongside Lydia Ko who won in 2013 and Valerie Adams who won in 2009.

The award for the sportsman of the year went to Mahe Drysdale for his triumphant rowing efforts at the Rio Olympics. The team of the year went the sailing due Peter Burling and Blair Tuke who managed to beat out the dynamic rowing pair of Hamish Bond and Eric Murray. Unsurprisingly, coach of the year went to Gordon Walker who was instrumental in orchestrating Carrington’s rise to glory. Walker beat out Steve Hansen and Hamish Wilcox as well as Jeremy McColl for the top award.

Disabled sportsperson of the year went to Liam Malone who won a silver and two gold medals at the Rio Paralympics. Malone took home the award beating out Anna Grimaldi, Mary Fisher and Sophie Pascoe in the hotly contested category. Other awards on the night included the Emerging Talent award which went to Campbell Steward for cycling and the Leadership Award which was handed to Sophie Pascoe for her Para-swimming efforts. Swimmer Myra Larcombe picked up the Lifetime Achievement award.

While all the athletes deserved the honour bestowed upon them, all eyes were focused on Lisa Carrington who picked up the Halberg top award. While Carrington was certainly the favourite for the K1 200-meter event in Rio, she was in completely uncharted waters when it came to the longer format. But despite facing a strong field and a longer race, Carrington managed to bring home Bronze, and claiming her second medal at the Games. Speaking to the press, coach Gordon Walker said that it was pure determine that got her home.