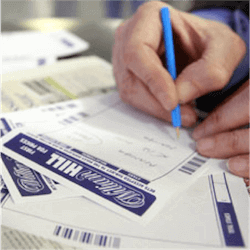 When Chelsea was crowned the Premier League Champions, there were more than a few punters who were happily cashing in on their success. Being able to predict which team will win the League months in advance is no mean feat. For one lucky British punter though, Chelsea’s win was just the icing on the cake that earned the man a whopping $133,000 off an $18 bet. How was this even possible?

The mystery football fan apparently placed a £10 accumulator bet on six different title winners for the season with the well-known bookmaker William Hill. All that is known of the man is that he is from Romford in the UK and placed a wager saying that Newcastle was going to win the Championship, Hibernian would claim the Scottish Championship, Livingston would win the Scottish League One, Sheffield United would win league one, Portsmouth would triumph in League Two and finality that Chelsea would win the Premier League.

A Shot in the Dark

As the months began to pass, all of the matches started to fall into place. The man’s complete shot in the dark bet slowly began to ring true with every passing weekend. Last weekend, all that was needed was for Chelsea to defeat West Brom and the bet would be complete. At the time of placing his bet, the punter put down £10 at accumulated odds of 7087-1. Before the match had even begun, the press was eager to get hold of William Hill and find out more details about the mythical punter.

William Hill spokesman Joe Crilly said that the bet was placed so long ago and for such a small stake that no one was able to recall the customer. He was pretty sure though that if Chelsea did win, the punter would make themselves known, eager to cash in on their winnings. Thanks to the efforts of Michy Batshuayi, Chelsea went on to defeat West Brom and pick up the required three points to claim the Premier League title.

In doing so, they managed to make one punter turn £10 into £71,000. What made the bet even more impressive than it appears is that fact that the League Two winners Portsmouth were not riding at the top the whole time. They only managed to go to the top of the table in the last 34 minutes of the last game of the season. It was the same story for Newcastle who only won the Championship after a late goal from Jack Grealish meant that Aston Villa denied Brighton the chance of the league title.