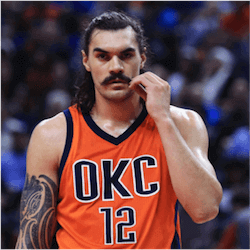 Adams Makes His Return to OKC Thunder in Win over Utah

The Oklahoma City Thunder welcomed back kiwi NBA star, Steve Adams. The big man made a triumphant return from injury as the Thunder downed the Utah Jazz 107-79 on Thursday night. Adams had missed the past two games for the thunder due to a concussion suffered on court. Thankfully, he was able to return to the starting line-up after successfully clearing the NBA concussion protocols.

Without Adam’s massive presence on court, the Thunder were in dire straits, just barely defeating the Denver Nuggets by one point before being thrashed the mighty New York Nicks. This time is was the Thunder that had the upper hand. Utah was missing two key players including NBA superstar Rudy Gobert and their new shooting guard wunderkind Donavan Mitchell. Both were out due to injury, giving Oklahoma City the start they needed.

It didn’t take long for the Thunder to show that they were there to play. They held off the Jazz to just 9 first-quarter points. Westbrook led the scoring. Making 10 of 13 shots, he racked up an impressive 24 points with 10 rebounds. Both Anthony and George finished with a decent run of 18 points while the thunder gained some much-needed confidence and momentum.

The Jazz found a little bit of rhythm after a disastrous opening stanza but was simply no match for the fired-up thunder team. With the team cruising to victory, Westbrook, Adams and Anthony were given a break in the fourth quarter, allowing the bench to get some valuable time on the floor. As for Adams, he finished with a respectable 11 points, with nine rebounds and a total of 26 minutes on the floor.

The 24-year-old New Zealand native simply picked up where he left of before his injury. Adams proved to be a valuable asset for the Thunder, once again showing why he is a key piece of the puzzle. In this current season, Adams has posted an average of 13.7 points per game with a 63.5% shooting average from the field with 8.8 rebounds. It bodes well for Adams as each of these stats is a career high. Having downed the Jazz, the Thunder go just above the all-important 500 mark with a total of 16 wins and 15 losses.