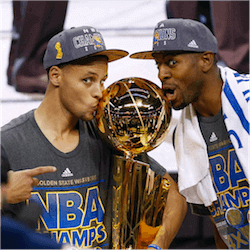 The Golden State Warriors have taken back the NBA Championship with a 4-1 series win over the defending champions, the Cleveland Cavaliers. The Warriors secured another brilliant victory in Game 5 on Monday night, outscoring the Cavaliers 129 points to 120. The near-clean sweep in the finals handed the Warriors their second NBA title in three seasons. The Warriors beat Cleveland in 2015 only to lose the finals in 2016 despite holding a 3-1 series lead.

This year, the Warriors made no mistake, dominating the finals from beginning to end. Kevin Durant, the Warrior’s lead scorer was named as the NBA’s most valuable player of the finals. Having moved over from the Oklahoma City Thunder, Durant was instrumental to the Warriors championship victory and their incredible 16-1 postseason run, which turned out to be the best in the league’s history. Durant capped off the finals with another 39 points while Stephen Curry added a healthy 34 points of his own.

Last year’s finals MVP, LeBron James led the scoring for the Cavaliers. LeBron racked up a massive 41 points with 13 rebounds and 8 assists. Despite his inspired performance, it was not enough to pip the Warriors with Durant scoring a crucial three-pointer with less than a minute left in the game. It was reminiscent of game 3 when the same thing happened to give the Warriors a 3-0 lead.

After joining the Warriors in 2016, Durant has taken just one season to win his first championship. The US Olympic Gold medallist has had an impressive year, scoring more than 30 point in each of the five games in the finals. In doing so, he became the first player to achieve such a feat since Shaquille O’Neal played for the LA Lakers in 2000. With an average of 35.2 points, 8.2 rebounds and 5.2 assists per game, Durant was the obvious choice for MVB.

Speaking to the press, Durant was quick to acknowledge the efforts of the Cleveland team. He admitted that the combination of Lebron and Kyrie is something he has never seen before. For Durant, the only person who he felt was a match for him was LeBron James. According to him, LeBron is the only player he has been focusing on since 2012. Durant apparently told LeBron that they were all tied up and were going to have to do it all again next season.