Warriors Edged out By Houston in NBA Opener 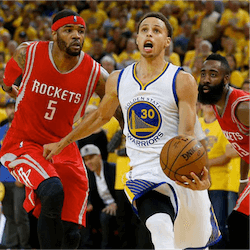 The Golden State Warriors NBA opener was filled to the brim with explosive plays, fourth quarter comebacks and a buzzer-beater that was reviewed and denied. Going up against the Houston Rockets, the Warriors took control early on in the game. However, the Rockets rallied in fourth to edge out Golden State by a single point. The final score coming out at 122 points to 121. This was a far cry from the 129-100 NBA defeat at the hands of San Antonio in the 2016 opener; but it hurt none the less.

Receiving their championship rings, the Warriors were fired up and easily slid into the lead. While they certainly found their rhythm, Golden State was unable to close out the game. This could have been due to their shortened preseason practice time in which they were flying off to China for a set of games against Minnesota. Either way, the Warriors allowed Houston to climb their way back and eventually take the lead in the fourth quarter.

As a start, it wasn’t all that bad. Nick Young had an excellent debut, coming off the bench and scoring six three-pointers for a total of 23 points. Durant had a bit of a slow start but contributed 20 points after a late surge. Meanwhile Curry added another 22 and Klay Thompson put in another 16.

For the Rockets, Harden took the lead with 27 points, Eric Gordon added 24 and Chris Paul added four on his 2-for-9 debut. In contrast, Young found his feet almost immediately. He hit his first four three-pointers and did exactly what the Warriors set him up to do; that is take a shoot every time he has even a sniff of the net. The six three-pointers he hit set a new franchise record for debut players in a season opener.

Durant warmed up as the game on. In the third quarter, Durant had a stroke of brilliance, blocking a shot by Anderson at one end of the court and then converting a three-pointer straight away. With just over 2 minutes on the clock Trevor Ariza sunk a three-pointer to bring the game back into range at 119-118.

Patrick McCaw then followed it up with a baseline jumper just after the Warriors timeout. PJ Tucker pulled things back with two free throws, taking the score to 122-121 in favour of the Rockets. With 10 seconds left on the clock, Durant came up with the ball, swishing it through the net as the buzzer went. The officials reviewed the play and decided it was after the buzzer, handing Houston the win.