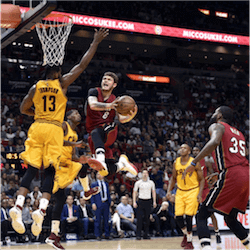 LeBron James has officially passed Michael Jordan as the highest scoring player in the NBA playoffs. James scored a massive 35 points to help the Cleveland Cavaliers defeat the Boston Celtics in the Eastern Conference finals. Having downed the Celtics 135-102, the Cavs have earned themselves a return trip to the NBA finals and a chance for the trophy.

Along with James who added 35 points, Kyrie Irving put in a decent game with 24 points while Kevin Love added another 15 to the total. The Cavaliers started well and were always in the lead with the gap as high as 39 points at one point in the game. To put the icing on the cake, the Cavaliers have set a new NBA record by winning their 13th straight series closeout. The win against Boston puts gives the Cavs at a 12-1 record for the postseason. They will meet Western Conference Champion, Golden State Warriors for the third consecutive time.

This is the same team the Cavaliers defeated in the finals last season, marking their first win for the franchise. For LeBron James, it will be his seventh straight trip to the NBA finals. The Cavaliers who gave the Celtics a bit of leeway in game 4, gave nothing away in game five. In the opening stages of the game it was the Cav’s Big Three that did most of the damage, racking up a 21-point lead in the first quarter.

Kevin Love was on hand to knock down shots from the outside while Irving and James broke free for a good selection on one-handed dunks. After hurting his ankle in game 4, Irving was showing no signs of any lingering issues. He come on strong, beating Celtics defenders and racking up a total of seven assists. Kyle Korver and J.R. Smith did their part, spreading out the Boston defenders and connecting up with some wide scoring opportunities. Deron Williams also managed to get in on the action adding another 14 points for Cleveland.

For their part, the Celtics did their best to keep pace with the Cavs. However, they failed to find the same consistency and defence that stunned the Cleveland team in Game 3. Speaking to the press, Celtics coach Brad Stevens said the team played a little haphazardly with a lot of mistakes from on the offence with led to bad defence. He was understandably disappointed with how the season ended for the Celtics but is happy his team make it to the conference finals.