Are Celtics better Without Isaiah Thomas? 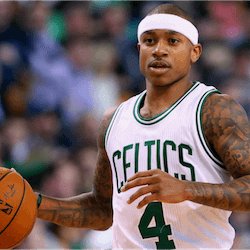 Isaiah Thomas’ Absence May be Helping the Celtics

Game 3 of the Eastern Conference finals was an interesting match, one where we learned that the Celtics are a completely different team without Isaiah Thomas. Having closed Cleveland’s dominant lead to 2-1, can the Celtics be deemed better without Thomas? It is hard to say. Thomas has been sensational all season. He is certainly going to finish up with a lot of MVP votes. He has also proved that he is one of the best scorers in the NBA.

With Thomas out, the whole dynamics of the matchup changed. Things just ended up benefiting the Celtics in a way nobody could have predicted. From the very start, the Celtics played the game defiantly. They got the pace on the ball and moved into their sets quicker than usual. They didn’t get lost watching their superstar dribbling the ball down the court; instead, they had no choice but to move the ball, because no one else was going to do it for them.

A Change in Momentum

In terms of defence, the difference was huge. Cleveland went out guns blazing in the first half, but was unable to sustain their momentum. Meanwhile the Celtics played their defence game with some drastic changes. Without Thomas helping them out, the Celtics actually had a huge defensive rating of 93.6 for the second half. In game 2, that number was around 132. Overall, their performance from game 2 to game 3 was transformative.

They moved the ball around a lot more, beating the Cavaliers on rotations. It might have come from outlier performances, but it does show that Boston have what it takes to set the game up in a completely different way. Debating whether to trade Thomas after a single game is silly, if the Cavaliers take game 4 and 5, the whole idea would seem like a bad dream. It often happens that a change in fortune goes hand in hand when a star player is out of action.

We saw the same thing with Kawhi Leonard in the match against the Rockets in the Western Conference Finals. If a team knows they are missing a star player, it changes how they approach the game. When the Warriors won game 2 in such a impressive fashion, it was actually a let-down in game 3, even for a win.