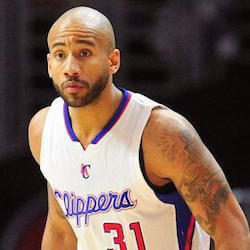 It is fair to say that Dahntay Jones has had a pretty decent time in the NBA for the past few years. The NBA dynamo won a much-coveted championship ring with the Cleveland Cavaliers in 2016, despite putting in just a single regular season game. He then went on to add another 15 appearances in the playoffs, adding some credit to his NBA stats.

In 2017, the story looks the same for Jones. The 36-year-old has just completed his second match of the year for the Cavaliers. This was in the Cavaliers’ first game of the second-round playoffs against the Toronto Raptors. Dahntay hasn’t been on the bench, in fact, his lack of appearance is all down to the fact that he hasn’t been part of the team for very long. In 2016, the Cleveland franchise bought Jones for a sum of $US9000 on the final day of the regular season. This year, they did it again.

Despite having Lebron James and the rest of the big playmakers in the regular season, the Cavs felt the addition of the 14-year NBA veteran was needed for their postseason security. Jones had been playing a number of pick-up games to maintain his fitness while the Cavaliers secured a spot at the top of the Eastern Conference. But it seems the Cavs enjoys his presence in the locker room and brought him on board.

LeBron to the Rescue

As they did in 2016, the Cavaliers bought Jones for $US9000, signing him just before the end of the regular season. The meagre sum is really not much in the scope of the NBA and after Tuesday’s performance, it became a lot less. In their match against the Raptors, Jones committed two technical fouls and was booted from the game. He subsequently picked up a $6000 fine for his infringements, a whopping two-thirds of his salary.

In 2016, a similar incident took place with Jones being suspended for game four of the Eastern Conference finals. This was after Dahntay Jones hit Bismack Biyombo in the groin. At the time, LeBron James picked up the tab, and it seems he will be coming to the rescue yet again. While he has agreed to pay the fine LeBron has a word of warning for his teammate. Speaking to the press, LeBron said that he told Dahntay that enough was enough; the NBA star has to stop getting kicked out of games.