LeBron 2016’s Sportsperson of the Year 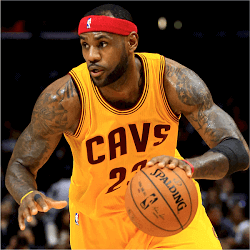 This past Thursday, Sports Illustrated, the world-renowned sporting magazine from the United States of America, made known that LeBron James of the Cleveland Cavaliers, the drought-breaking winner of the NBA Championship, will be its Sportsperson of the Year for 2016.

There was some argument, as there always in, that the Chicago Cubs baseball team, who also enjoyed an historic breakthrough as well, or an Olympic athlete like Michael Phelps or Simone Biles would receive the recognition, but these disputes could not ignore the fact that James’ efforts were indisputable in the Cavaliers’ recovery against a 3 – 1 National Basketball Association, or NBA, Finals shortfall against the Golden State Warriors.

Ten years ago, however, Sports Illustrated’s choice of who earned this honour was a lot more controversial. In fact, it created problems between the publications staffers, says Christ Stone, editorial director.

Staff Disagreed on the 2006 Winner

2006’s list of candidates was eventually whittled down to a race between two athletes: tennis’ Roger Federer and basketball’s Dwayne Wade.

Federer had just completed what many people argues was tennis history’s finest year: he managed to win 92 of a total of 97 matches, and took first place at three of the four Grand Slam tennis matches, with the French Open being lost to Rafael Nadal, dominator of clay courts.

Federer was widely considered to be at his absolute peak, and had created a career in which he was widely held to be one of the finest athletes of all time. Sports Illustrated staff members who felt that he more than deserved the title of Sportsperson of the Year numbered not a few.

But this coveted title is not awarded by vote; it is left in the hands of the magazine’s head honcho, who, from 2002 to 2011, was Terry McDonell –who selected Wade.

McDonell Defends His Choice of Wade for 2006

In an interview this week, McDonell states that his decision was not a result of his preferring basketball over tennis, and that he had reasoned that Federer would certainly receive the award in the following year. He admits, however, that, hindsight being 20/20, it is “dangerous to plan ahead.”

McDonell’s choice of Wade is definitely defensible, albeit unpopular: Wade had averaged 34.7 points; 7.8 rebounds; 3.8 assists; and 2.7 steals, and had done all this whilst simultaneously leading Miami Heat back from a deficit of 2 – 0 to defeat the Dallas Mavericks in the NBA Finals game they were matched up in.