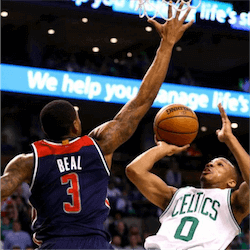 Rudy Gobert of the Utah Jazz is one of the biggest players on the court and a candidate for the NBA defensive player of the year award. However, in the first game of the NBA Western conference semi-finals, Gobert didn’t stand a chance against Stephen Curry. Game 1 between the Jazz and the Golden State Warriors saw the two-time MVP player showing off moves that left Gobert spinning in place. Utah did their level best to keep the game as close as possible, but every time the Jazz got within striking distance, the Warriors found a way to extend their lead into double-digits.

After a week long layoff, the Golden State Warriors were firing on all cylinders. Stephen Curry scored 22 points in three quarters of the game helping the Warriors to a convincing 106-94 win over the Utah Jazz. The opening game of the Western Conference saw Draymond Green scoring the first six points for the Warriors, winding up with a total of 17 with 8 rebounds and six assists. Kevan Durant added 17 points with 5 rebounds and 5 assists. Rudy Gobert did the job for the Jazz with 13 points, 8 rebounds and 2 blocks.

In the NBA Eastern Conference semi-finals, Isaiah Thomas helped the Boston Celtics defeat the Washington Wizards with a massive 53 point game. The Celtics take a 2-0 lead in the best of seven semi-finals downing the Wizards 129 points to 119. Isaiah Thomas became the fourth player in the history of the Celtics to score more than 50 points in an NBA post-season game. Unsurprisingly it was also a career best for the NBA star.

For the Wizards, John Wall racked up 40 points with 13 rebounds to keep the Wizards within touching distance. For Thomas, the post-season has been a rollercoaster ride. His sister died on the eve of the first round with the star attending the funeral on Saturday before joining the team again on Sunday morning. This was just a few hours before the game in which the Celtics went on to win and Thomas lost a tooth at the same time. The team doctors managed to put it back in but Thomas spent most of Monday and Tuesday at the dentist getting the tooth repositioned.