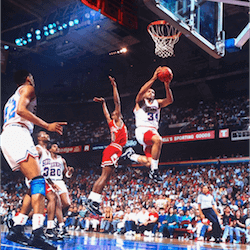 With the regular season over in three weeks, and the 2017 NBA Playoffs due to start on 15 April, New Zealand baseball fans will be considering betting options for the final rounds of the 2016-17 US season. The NBA Conference Semi-Finals begin on 1 May, with the Conference Finals scheduled to start two weeks later, and the NBA Finals beginning on 1 June.

At the time of writing, three of the four Playoffs spots in the Western Conference were settled. San Francisco’s Golden State Warriors are also winners of their Pacific Division, with an unassailable win-loss record of 55-14 to date. The other two Western Conference teams with a definite Playoffs berth are both Southwest Division sides from Texas: division leader San Antonio Spurs and the Houston Rockets.

The Northwest Division leader, the Utah Jazz, will have to fight off competition from the LA Clippers, the Oklahoma City Thunder and the Memphis Grizzlies, to secure the final Playoffs spot in the Western Conference.

With a 46-23 record, including Sunday’s 125-120 win over the LA Lakers, the Cleveland Cavaliers not only maintained their place atop the Central Division and the Eastern Conference, but they also secured that conference’s first Playoffs berth.

However, Atlantic Division leaders the Boston Celtics, on 44-26, and the Washington Wizards with 42-27 topping the Southeast division, both look likely to make the Playoffs too.

The final Playoffs spot in the Eastern Conference is likely to be the most hotly contested. The Toronto Raptors, the Atlanta Hawks and the Indiana Pacers are the front-runners, but the Milwaukee Bucks, Detroit Pistons and Miami Heat can’t be ruled out yet either.

New Zealand betting fans might want to wait for the end of the regular season on 12 April, before placing their bets for the NBA Playoffs and NBA Conference Semi-Finals.