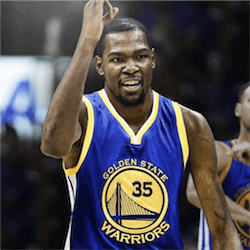 Tragedy struck just 93 seconds into the first quarter of the match between Golden State Warriors and Washington Wizards. After a brief altercation between Wizard’s Marcin Gortat and Golden State’s Zaza Pachulia, Pachulia stumbled and went crashing into teammate Kevin Durant. Durant immediately showed signs of having injured his left knee, but bravely tried to continue playing. Not soon after, however, the Warriors called a timeout and Durant left the game, wincing in pain. The game ended with a Warriors loss to Washington, 112-108.

The extent of Durant’s injury is not yet known, and he is due to go for an MRI scan soon. It has been reported that his left knee was overextended. It seems there is a possibility he may not be able to play, although this is not yet known in any certainty, but the Golden States have already announced a contingency plan, signing up veteran Matt Barnes.

This unfortunate early exit for Durant was regrettable for many reasons, not in the least that it ended an impressive streak for the talented player, who had been scoring at least 10 points in every match he participated in. In this case he had taken only one shot, which had been a miss, and so left the game having scored 0 points. This must have really stung Durant.

Interestingly, this was also the first game in which Durant was playing against his previous couch, after signing with the Warriors. The couch in question was Scott Brooks, who had previously been at the helm for Oklahoma City Thunder. Brooks had taken charge of the Washington Warriors starting this current season.

Knocking Down a Winner

Brooks had spoken positively about Durant in an interview, stating that he viewed Durant as a winner, and had not one negative thing to say about him. He went on to declare Durant as a champion both on and off the court, and declared that he wished all players were as professional. Durant must have smiled from ear to ear being praised so highly by his former couch. It seems the two had an excellent professional relationship.

In light of Durant’s injury, it was announced via ESPN.com that none other than Matt Barnes would be replacing Durant, as already said. Barnes has not seen action with the Warriors since his previous 2006-2008 stint. Seeming to be pleased with the situation, Barnes posted a photo on Instagram, and made the brief statement that he was going back to where it all started. The photo featured him dressed in the Warrior’s official uniform.

There is no word yet on how exactly the situation will pan out, and official word on Durant’s injury has not yet been given.