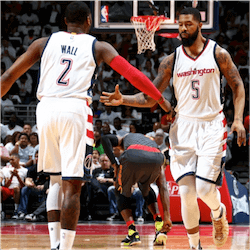 The Washington Wizards have beaten the Atlanta Hawks to take a 2-0 lead in the NBA Eastern Conference first-round series. Bradley Beal was the key for the Wizards, adding 16 of his 31 points in the fourth quarter and nailing a late three-pointer to give the Wizards their 109-101 point win. The rough-and-tumble game was filled with fouls on both sides of the line. John Wall also instrumental for the team, adding 32 points with nine assists including the one to Beal for his shot with 38 seconds left on the clock.

The Washington team trailed by four points going into the final period. With both Markieff Morris and Otto Porter Jr, finding themselves in foul trouble, the two added a meagre seven combined points in the final quarter. For the Hawks, it was Paul Millsap who led the scoring. He managed a healthy 27 points with 10 rebounds. Dennis Schroder added a respectable 23 points while Dwight Howard only managed six points and seven rebounds, which was half his first game total.

Paul Millsap scored the majority of his points in the third quarter, which included six points during a 13-0 run for the Hawks leading up to the final quarter. In fourth quarter, Beal and Wall proved too much for the Hawks along with Brandon Jennings who made up the three big scorers in the final stages of the game. After Washington claimed the series opener last week, Millsap had a few words to say about the game. According to him, the Hawks were playing basketball while the Wizards were playing MMA.

This became a major talking point between games and possibly affected the way the second game was called. While it was a far cry from an MMA fight, the officials were certainly eager to use their whistles at the slightest inkling of a foul. However unjustified the calls may have seemed, one thing was certain. The interruptions from the constant foul calls disrupted the flow of the game which could have ended differently.

In the opening 24 minutes of the game, 29 personal fouls were blown. This number increased to 55 by the time the final buzzer went. The Wizards had their fair share of complaining though, especially when Kelly Oubre Jr had to join Morris and Porter on the sidelines. The team also picked up a second delay-of-game foul, which resulted in a technical. Less than a minute later, Howard picked up his fourth four while Kent Bazemore got number 4 going into the final quarter.