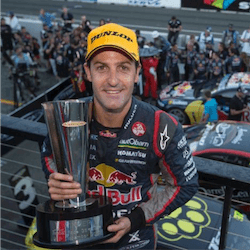 Jamie Whincup is ecstatic after he won his 105th Supercars race. Not only is this an amazing achievement on its surface, but it is also a figure that put the driver on an all time record amount of wins, on equal footing with his teammate Craig Lowndes.

Whincup took his historic win at Townsville, in the process not just equalling a record but also leaving ladder leader Scott McLaughlin in the dust. McLaughlin finished a whole 1.6 seconds behind Whincup but retains his overall lead in the Supercar standings by 6 points.

This charts Whincup’s first win of the year. The driver took an early lead and then managed to hold the aggressive McLaughlin at bay for the entire race, comfortably taking first place. He did manage to get some help early on from David Reynolds. Reynolds had a quick start and ended up in between the Penske drivers and the Red Bull cars, offering a nice race opening wedge for Whincup. He saw his chance in Lap 6 after shadowing Reynolds and slingshot past the racer to move up in the field.

Whincup and McLaughlin followed a similar fuelling strategy so they were literally nose to tail for the first 20 laps of the second stint. Whincup then started breaking away, increasing the lead to 3 seconds from under 2. After he made his second fuel stop in lap 41, the gap shrank again.

McLaughlin managed to hold out two extra laps after Whincup’s pit stop, possibly to attempt to bridge their gap more, but he could only gain about a second on Whincup. The two driver’s battle continued but surprisingly McLaughlin could not keep up his intense assault and with about 10 laps to go Whincup stretched his lead to almost 2 seconds.

Third place was taken by Shane van Gisbergen who did put up an admirable performance. He took 4 extra laps to squeeze past Dan Reynolds as compared to Whincup and he claimed his third place spot 7 seconds behind the two race leaders.

Unfortunately Fabian Coulthard had his second bad day in a row. He was at one point in time the points ladder leader but recent poor performance has cost him dearly. Coulthard had a wide turn in the first lap that saw him drop into the mid field.

He ran into Tim Slade, which resulted in a 15 second penalty that essentially removed any chance of making a go for the race. He finished the race in 21st place.