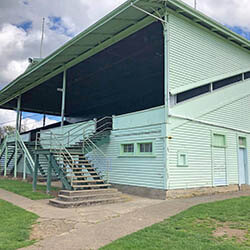 Sport, and certainly also in particular the 96-year-old Taihape Memorial grandstand, means a great deal to members of the Taihape community. Which is why Taihape’s Heritage Group on Thursday brought a petition before the local Rangitikei District Council, requesting that the grandstand be restored to full functionality.

New and upgraded facilities planned for the beloved grandstand include a single-story restroom, including a shower, toilet, and changing block. These are according to existing plans to be erected near the southern end of the age-old rugby field. The petition however argues that to erect a separate modern ablution block away from the grandstand will only leave the historical building to wane away completely. The heritage group is requesting that the new facilities be erected under the original seating area of the stand instead.

Since there clearly aren’t funds sufficient enough to renovate the grandstand and build a new separate ablution block, the best possible way forward would be to incorporate the two, says Taihape Heritage Group representative Geoff Duncan.

Since the grounds are regularly used all throughout the year for matches as well as middle of the week practice sessions, Duncan and the group believe grandstand to be deserving of restoration. The existing structure in its current format can easily accommodate a large shower are, at least six changing rooms and toilets, ample space for storage, a catering area, and a couple of medical rooms.

Not only does the old stand provide to local people a sense of community around sport, but the building is also regarded to be of key historical value.