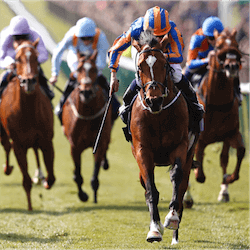 New Zealand’s horseracing enthusiasts can enjoy online betting action aplenty throughout the 2017 international racing calendar, with betting sites giving access to the most prestigious races around the world.

England’s 2000 Guineas Stakes, to be run at Newmarket’s Rowley Mile Course on 6 May, should be worth New Zealand punters’ while. It’s an historic one-mile flat race for three-year-olds that has been run since 1809 on the famed three-track racecourse in Newmarket, Suffolk.

Known as the QIPCO 2000 Guineas under current sponsorship, the Class 1, Group 1 race is run over 1609m for a total purse of £500,000. It’s the year’s first of five Classic races in Great Britain, and also the opening leg of the British Triple Crown, which includes the Derby at Epsom Downs in June, and the St Leger Stakes at Doncaster in September.

The only horse in recent times even to challenge for all three races, however, was Camelot in 2012. The Irish-trained colt won the Guineas and the Derby, but finished second in the St Leger. The last Triple Crown winner was Nijinsky, ridden by Lester Piggot, in 1970. This year, punters will be hoping another contender finally emerges at the 2000 Guineas.

It’s early days yet, but even before the 69 entries are whittled down for the Guineas, some horses are showing strongly in the ante-post betting. Bookies are offering around 6-4 on Irish colt Churchill, sitting on five consecutive wins from six starts, after finishing third on debut. His last two victories have been in Group 1 races, so he is attracting lots of interest from punters.

Churchill is one of 11 possibilities entered this year by trainer Aidan O’Brien, already a seven-time winner of the Guineas. Unbeaten in four starts, Kentucky-foaled colt Caravaggio is also fancied, at around 6-1. He’s had a long rest since winning the Group 2 Coventry Stakes and Group 1 Phoenix Stakes in June and August last year, so he should be a strong challenger.

Caravaggio’s stable-mate War Decree, another Kentucky-foaled colt, is on two wins and one second from three starts. At 16-1, he’s the third of the O’Brien-trained horses that many will be backing.