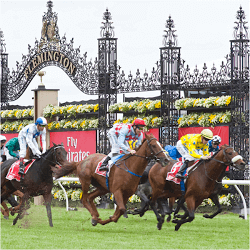 Everyone knows that the Melbourne Cup is the race that stops a nation in Australia; there is even a public holiday on that day. What is often overlooked is that it is as popular in New Zealand, both with trainers as well as punters.

Many punters take the day off work to go and sit either in a pub, in front of their TV with a computer of phone handy, or even go to the racetrack itself. Kiwi bred and trained horses enter the race as much as Australian ones do, and many of them win. Historically there have been some really big names like Phar Lap and Prince of Penzance.

Aside from the actual racing, the whole Melbourne Day Spring Carnival is huge. It is the height of the fashion calendar as well as the social one. Food from top restaurants is on show, as well as smaller food stalls for the average crowd. The tradition has been going on for 150 years and is thus ingrained in pretty much every Australian and New Zealander.

New Zealand Interests in the 2016 Cup

There were a number of New Zealand horses running in this years cup, these included Who Shot The Barman ($31), Pentathlon ($81) and Rose of Virginia ($81). A number of Kiwi jockeys were also riding.  Recently banned jockey James McDonald was riding the favourite, Hartnell as well as Michael Walker aboard Almoonqith, and Mark Du Plessis on Pentathlon.

Pentathlon was the only New Zealand bred, trained and ridden horse in the cup. The others all had either an Aussie jockey or an Aussie owner.

Other Horses and Wagering

Many punters place a wager on the race, and it is always worth it to take the time to squizz at all the horses properly. The New Zealand TAB took over one million bets on the race on the day and before it.  Knowing your horses puts you in a good position to hazard a calculated guess at who may or may not win. Also knowing which jockeys work best with which horses will help. But then again, sometimes things just don’t go as planned at all.

Hartnell, from the Godolphin stables was the favourite to win the cup. He didn’t however, and pulled in third behind Heartbreak City and Almandin. Almandin had been plagued with injuries in his run up to the cup, so wasn’t a really big contender in the eyes of the public, which just goes to show how wrong one can be.

The New Zealand entrants did not do too badly, bearing in mind that they were running against the likes of horses like Hartnell. Who Shot The Barman was fifth, Pentathlon ninth and Rose Of Virginia a disappointing last place.  Who Shot The Barman’s rider was very happy with the horses run, stating that a closer draw may have resulted in a closer run. Pentathlon apparently got stuck outside the pack on the corner and had to go around them. Rose of Virginia’s rider reckoned that there might have been something wrong resulting in her disappointing run.