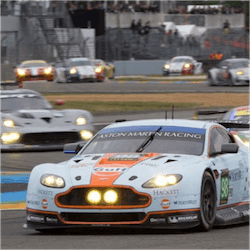 In February this year, the 85th 24 Hours of Le Mans grid was announced at the Automobile Club de l’Ouest web conference. In the LM P1 category, we expect to see a thrilling duel between Toyota and Porsche while in the LM P2 category; a record field has been entered. The LM GTE pro and LM GTE categories are all up for grabs in one of motorsport’s biggest endurance races of the year.

Over the past few months, the teams invited to the race have slowly been revealing their line-ups. While most of the spots are confirmed, there are still plenty of seats up for grabs in the LM P2 category. Taking up 25 out of the 60 cars, the LM P2 class accounts for just under half the grid. This equates to around 75 drivers in totals. At this stage, all of the teams have nominated their designated driver, however, many teams have yet to release their full line-ups.

One exception this year is Vaillante Rebellion. Returning to the LM P2 class, the team selected their full list of drivers some time ago. The Swiss team will again be running with the number 13. Their line-up will include Nelson Piquet Jr who is returning for a second consecutive year as well as Mathias Beche and David Heinemeier Hansson. Oreca 07 will be given to Nicolas Prost, Buno Senna and Julien Canal who is a three-time class winner at Le Mans.

TDS Racing have also finalised their line-up of the number 28 Oreca 07 for the 24 Hours of Le Mans. Sharing the wheel will be Francois Perrrodo, Emmanuel Collard and Matthieu Vaxivière. TDS Racing are also planning to run G-Drive number 26 Oreca with Pierre Thiriet and Roman Rusinov as the two named drivers so far. G-Drive Racing’s number 22 Oreca has Memo Rojas confirmed but is waiting for a fellow teammate to be announced. They will be contesting the European Le Mans Series together with DraonSpeed.

There are only four other teams who have confirmed all three drivers for the 85th 24 Hours of Le Mans. Racing debutant, IDEC Sport Racing will be headed up by Paul Lafargue along with David Zollinger and Patrice Lafargue. The all-Italian outfit Cetilar Villorba Corse will have Roberto Lacorte sharing the driving with Sernagiotto and Andrea Bellicchi.