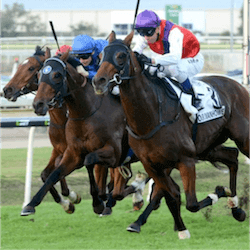 Auckland Cup Week, New Zealand’s richest week of racing, will be upon us on March 04. That’s the first Saturday of Ellerslie Racecourse’s prestigious autumn event, kicking off with the most glamorous meeting on the racing calendar: New Zealand Derby Day.

The famous Fashion in the Field competition draws the socialites, but serious punters will be focused on the day’s feature race. The Derby is a Group 1 set-weights handicap for 3-year-olds over 2400m, for a purse of $1 million.

Many racing fans were hoping to put an outside bet on promising colt Hall Of Fame, winner of the 1600m Group 1 Levin Classic at Trentham last month. However, trainers Jamie Richards and Steve Autridge have decided to keep him out of the longer races for now, after he ran fifth of 16 in the 2000m Waikato Guineas at Te Rapa on February 04.

Gelding Sacred Elixir is the favourite at $5.00, and punters should check his form over 2100m at Ellerslie’s Avondale Guineas on Saturday. Joint second favourites at $6.00 are Savile Row, the colt that ran a close second to Volkstok’n’barrell in Te Rapa’s Herbie Dykes Stakes on Saturday, and Camino Rocoso, the gelding that has won his last two starts at Ellerslie this season.

Sacred Elixir is not the only horse trainer Tony Pike is hoping will bring home the bacon during Auckland Cup Week. He also trains Chenille, the 5-year-old mare currently being offered as the $6.50 favourite for the Auckland Cup on March 11. Run at Ellerslie over 3200m since Victorian times, the Group 1 Auckland Cup for 3-year-olds or older is one of New Zealand’s most historic races for stayers.

Chenille proved she has the legs over 2200m at Ellerslie, when she won the Karaka Stayers Cup in January. Punters should watch how she does over 2400m at Ellerslie’s Avondale Cup this Saturday. An outsider that betting fans may also want to consider for the Auckland Cup is Savaria, currently at $13.00. The 5-year-old mare proved she is up to the distance when she won the 3200m Wellington Cup in January.