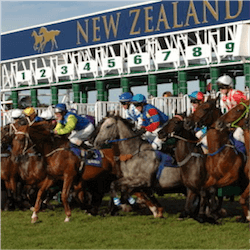 The highlight of the day is the feature race, the Group 1 New Zealand Derby for 3-year-olds, run over 2,400m for a purse increased this year to $1-million. Last year’s winner, Rangipo, trained by Tony Pike, is not nominated for the 2017 race. However, the current favourite is also trained by Pike: Sacred Elixir, which some bookies are offering at $3.50.

Sacred Elixir’s favourite status is based on a second place in the Group 1 Victoria Derby in November 2016, and an exhibition gallop at Ellerslie last week. The gelding is a good stayer and pretty fit, but that doesn’t mean the NZ Derby will be a walkover: colts Savile Row and Hall of Fame, and gelding Highlad, are also in single figures on the betting tables. Savile Row is at $7.00, with the other two neck-and-neck on $8.00.

On Saturday, March 11, Auckland Cup Week reaches a climax with Auckland Cup Day, one of New Zealand’s most prestigious annual racing events. The Auckland Cup Open Handicap has been run at Ellerslie since 1874, and its ornate Victorian silver trophy has been an icon of world racing since the 1930s. It is a two-miler, slightly reduced to 3,200m by the metric system, carrying a total purse of $500,000.

Needless to say, it’s a Group 1 race that attracts stayers with speed, strength and stamina. The early favourite is 4-year-old gelding Pentathlon at $8.00, with mare Chenille and gelding Bloodstream, both 5-year-olds, hot on his heels at $9.00.

But as $125.00 outsider El Soldado proved last year, you don’t have to be a favourite to win the Auckland Cup. Racing fans need to watch the form for the rest of Wellington Cup Week, and all the meetings to come in February, if they want to put a solid bet on in March.