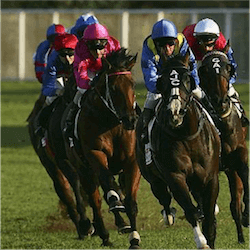 Saturday’s Sydney Autumn Carnival opener at Royal Randwick racecourse goes by a number of designations, including Day Two of ‘The Championships’, depending on which of the meeting’s four historic Group 1 races is being punted at the time.

But Australian Oaks Day is a fancied outsider in the nickname stakes, as the only set-weights handicap restricted to 3-year-old fillies. The 3200m Sydney Cup for 3-year-olds and older, and the 1600m weight-for-age Legacy Stakes for fillies and mares only, are the other two Group 1 races that will be keeping punters entertained on Australian Oaks Day.

The 2400m Australian Oaks, for a purse of $1-million, will be the first of the four great races run on Saturday, so its field of 14 will attract a fair amount of interest from New Zealand race betting enthusiasts. With champion mare Winx ranked by bookies as a dead cert in the Queen Elizabeth Stakes, punters will be looking for more rewarding action in the other Group 1 races.

Bonneval and Lasqueti Spirit Worth a Look

New Zealand filly Bonneval, on three successive wins including the New Zealand Oaks at Trentham last month, is the $4.20 favourite for the Australian Oaks, but she isn’t too far ahead of arch-rival and New Zealand Oaks runner-up Devise at $8.00.

The second and third favourites for the Oaks are also New Zealand fillies: Harlow Gold at $5.00 and Nurse Kitchen, who might triumph with a trademark late charge on Saturday, at $5.50. The outsider with the best chance of causing an upset is probably Waking Moment, at $31.00.

Australia’s Lasqueti Spirit comes into the Australian Oaks off a win in the Crown Oaks at Flemington. After some disappointing mixed starts, she could reward in a race restricted to her sex and age, and is priced like Devise at $8.00.