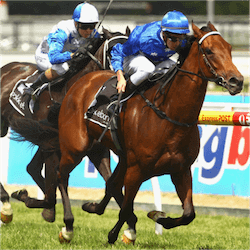 The main race of the day, the Blue Diamond Stakes, is a 1200m set-weights handicap for two-year-olds, with an Australian record purse of $1.5-million. A lot of punters will fancy Catchy, after the filly surged home to beat Limestone by a nose in Saturday’s 1100m Group 2 Blue Diamond Prelude (F) at Caulfield.

However, jockey Craig Williams also rode Property to victory in the 1100m Group 3 Ladbroke’s Blue Diamond Prelude (C and G). The gelding may also be in the Blue Diamond Stakes draw, so it isn’t clear yet which will be Williams’ mount at Caulfield.

However, New Zealand 5-year-old entire Turn Me Loose, winner of the 2016 Futurity Stakes, led the C.F. Orr practically from the start, with Black Heart Bart only coming through to win by a length in the final 50m, after challenging hard from the 300m-mark. Turn Me Loose is also nominated for the Futurity Stakes, so Caulfield could see a replay.

The third great race at Caulfield on Blue Diamond Stakes Day is the 1100m Oakleigh Plate, an open handicap. It will be the first race of the year for promising Nick Price-trained three-year-old colt Extreme Choice, who won four of his six starts in 2015-16; all of them sprints.

Another one to watch for in the Oakleigh Plate will be Thermal Current, the 6-year-old gelding trained by Darren Weir. He’s won two 1000m races from three starts this year, including the W.J. Adams at Caulfield on February 04.