The Breeders Crown This Weekend 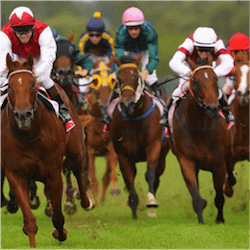 The Breeders Crown 3yo Colts And Geldings

This weekend sees the running of the Breeders Crown, Colts and Geldings, for 2017. It will be featuring the return of renowned New South Wales driver Luke McCarthy.

McCarthy was last at Melton in February. McCarthy took the Hunter Cup Group 1 race with Bling It On. Now he has returned to race three of the top contenders for Mark Purdon and Natalie Rasmussen.

McCarthy To Ride Three Of Field

Purdon personally asked McCarthy to fill in on three of their most important races while Purdon was in Canada for the World Driving Championships. McCarthy will be driving 3 Breeder Crown finalists, namely Partyon in Race 4, The More The Better in Race 7 and Sicarion in Race 8.

Not only is this a fantastic opportunity for McCarthy, but it is also a serious threat to the field. McCarthy is one of the best riders in the business and Purdon and Rasmussen’s stable isn’t called the All Star Stable for nothing.

Race Favourite The More The Bettor

The More The Bettor is a favourite in the field with odds currently standing on 1.60. McCarthy thinks that he is the best shot for a win since The More The Better also managed to draw a barrier start.

In his race Stars Align and Motu Meteor will provide the strongest challenge to The More The Bettor but McCarthy is confident in himself and his horse.

The More The Bettor will have something to prove this weekend. He will want to make up for his narrow semi final second place against Our Little General in his last race.

Partyon is currently getting odds of around 4 and McCarthy thinks since he received a back row draw this race will be a challenge. In his race a strong challenge will be coming from Petacular who has yet to be beaten in a front row draw.

This will surely be an uphill battle but this weekend is as good a time as ever for Partyon to shine as this is the finest form the horse has been in.

Sicario will also be facing a hard race. He has been given odds of around 3.70. It is clear to see that the horse has layered on great muscle but he also received a back row draw like Partyon. This will mean Sicario needs to put that muscle to good use to push ahead of the strong pack.