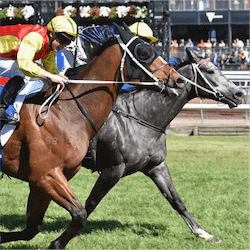 Autumn and winter bring a wealth of Australian horseracing action to keep New Zealand punters entertained. As the autumn carnivals run their course in Perth and Adelaide, the Brisbane Winter Carnival gets into gear on the Gold Coast.

This year, the race is still likely to attract a field worthy of a punt, but it has been subject to significant changes: namely the name, length, purse, venue and date. The good news is that the rechristened Darley Kingsford-Smith Cup over 1300m, to be run at Eagle Farm Racecourse on 27 May, now offers total prize money of $700,000, so it is likely to attract a strong field as usual.

Only one horse has won the BTC Cup two years in succession: Buck’s Pride in 1993-94. The 2016 champion, Malaguerra, will be chasing that record in the 2017 Cup. The 5-year-old gelding is likely to once again face stiff competition from Spieth, the 4-year-old entire who finished second to Malaguerra in the 1200m Group 1 Darley Classic at Flemington in November.

In their most recent Group 1 sprint encounter, the 1200m TJ Smith Stakes at Randwick on 1 April, the two horses continued their rivalry, although with a much less impressive result. The heavy going saw Malaguerra finish seventh of 15, and Spieth 10th.

However, if the going is good on 27 May at Eagle Farm, the race could be between these two excellent sprinters. They are currently joint ante-post favourites at $7.00.

Another horse to consider is 5-year-old gelding Fell Swoop, at a more profitable $12.00. He finished third in the TJ Smith, so racing fans will follow his run in the Doomben 10,000, now scheduled for 13 May, with interest.