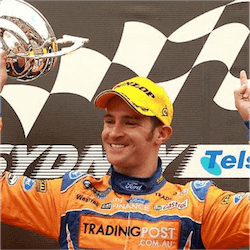 The current defending Bathurst champ, William Davison, remains unsigned for the next Supercars season. The talented Davison is confident that he will keep racing but he is just not sure with whom yet. He joined Tekno Autosport on a 2 year contract last season, set toe expire in 2017.

The driver had a promising start with Tekno, claiming his Bathurst win and ending the season in 5th place. This year has been a different story however with Davison currently in 13th place after a tough season start.

It seems that the delay in confirmation of what his future is with Tekno is due to the company looking for alternate sponsorship deals in order to afford their continued Supercars participation.

Best Years Ahead Of Him

Davison at 34 still has great years ahead of him. He would love to add a championship to his solid race performance, he says. In his career so far he has raced with Wilkinshaw, Erebus, Dick Johnson Racing and Prodrive.

In the 2009 championship, Davison finished second and in the 2013 championship he finished in third place. He has stated that it is challenging with Tekno being a single car team but he is confident in his ability to improve his problem strewn 2017 season.

He achieved 4 top ten finishes this season but he also ended up in 15th or worse for four races at the Hidden Valley and Townsville weekends.

Meanwhile James Courtney from Mobil 1 HSV Racing has resigned with the team for another 3 years despite the technical issues plaguing the team that has left him with a result of 17th place or worse in his last 10 races. He is currently in the 20th place in the Supercars rankings.

The 37 year old driver joined the team in 2011 as the then reigning champ but the team has never gotten properly off the ground with engineering issues cited as holding the team back. Courtney has referred to the team as the “McLaren of Supercars”, lamenting the small department of 3 full time engineers and one part time engineer.

They have identified the issues holding the car back but finding a suitable solution to implement has so far proved elusive. The team also adopted new Dunlop tyres this season that Courtney has said has exacerbated the existing problems with the car’s control as it comes out of corners.