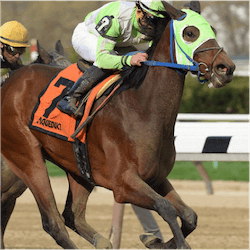 The Silver Shadow is the start of the Princess Series and will go into the Furious Stakes, The Tea Rose Stakes and the Flight Rose Stakes.

James Cummings nominated Alizee and Jorda, his two Godolphins. Jorda is a bit of a mystery, as she will be competing for the first time since October last year. She won her only race start at the Gimcrack Stakes then and has been quiet ever since.

Alizee has grown notably since her debut. The 3 year old missed qualifying for the Golden Slipper at the Magic Night Stakes thanks to the zip of another Silver Shadow Stakes nominee, Tulip.

She did not win any races as a juvenile but it is clear she has a great season ahead as a 3 year old. She seemed tired by the end of her Kindergarten Stakes run, but when she popped up again in a Rosehill trial she looked to be in fantastic shape.

Bjorn Baker nominated his star filly Champagne Cuddles for the Silver Shadow Stakes. The filly has already had two wins from two starts, taking the Pierro Plate in October and the Redfern Plate this year.

The Lindsay Park Team has nominated Tulip and Formality, two horses who have performed great in their past runs. Tulip has had a good run so far this year. Her last run found her a 5th place at the Golden Slipper Group 1.

Busuttin and Young’s Seannie will also be taking part in the Stakes after her nomination. Seannie won two starts in her two year old career, wins that included the Listed Supremacy Stakes. According to her new trainers, Seannie may well be heading to the 1500m Thousand Guineas as it seems the short sprints are holding her back.

This year’s Silver Shadow Stakes is quite unpredictable. The line up features old rivals and reinvigorated fillies for a truly unique race set for fans this Saturday.