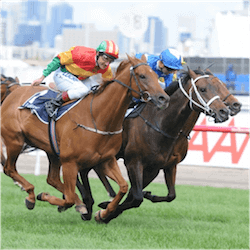 This Saturday is the running of the annual Breeders Crown 3yo Filly Trot. This harness racing event is specifically held for female trotters who are Standard Bred. The event is held in Melton Park.

With a prize purse of $190 000, it is one of the most coveted harness racing events on the calendar. Last year Broadway Donna, who won’t be making a return this year won the event.

Triton Back In Saddle After Birth

Ace driver Lauren Triton will be making her much anticipated return. She has been out of racing to give birth to her son but she has been anxious to get back behind the harness and it doesn’t get more prestigious than making your return at the Breeders Crown.

With her son Levi barely a month old, Lauren will be racing My Sweetchillyphilly. Lauren will also be riding at the Menagne trials as well as the Melton where she will be riding My Riviera Belle.

My Sweetchillyphilly won 5 of her previous 6 races but suffered a harsh defeat in her last race, ending in fifth place when she was a 1.60 favourite. This has given her odds of 7.50 this weekend making her a potential value bet if she returns to form on Sunday.

Petacular has had a great few runs recently. She won the Race To Royalty Breeders Crown Semi Finals last week and managed to draw gate 3 for this Sunday after some vey unlucky draws in previous races. Her win last week certainly appeared to be one of her easiest as all her previous showings have been very hard won.

With so much at stake and with such a talented field, this years’ 3yo fillies’ finals should be a cracker. With some of the finest harness racing action out there, this Sunday will definitely be one for the books.