Gagne To Honour Hayden at Laguna 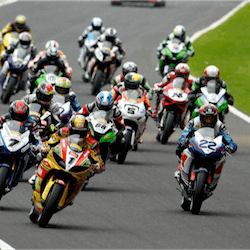 Red Bull Honda have been looking for a new rider to take charge of their CBR 1000 RR SP2 bike in the US round of the World Superbike event this weekend at the legendary Laguna Seca raceway. The lucky rider was none other than Jake Gagne.

Jake was selected as he has the most experience on the CBR 1000. He is currently racing one in MotoAmerica Superbike tournament but he will be joining team mate Stefan Bradl at Laguna Seca.

Gagne is a great addition for Team Red Bull. This talented rider made a name for himself when you won the Red Bull Rookies Cup in 2010 at the tender age of 18. He then went to build some experience at the Spanish CEV Moto 2 Championship.

The Loss Of Nicky Hayden

Gagne comes unto the race following the sudden loss of Nicky Hayden. He will be replacing the star rider after he passed away due to a sudden accident. Hayden was cycling in Italy when he was struck by a car and eventually succumbed to brain injuries.

Red Bull had been keeping his position vacant out of respect and solidarity with fans and family. They decided that to replace Hayden in the American leg of the World Superbike tour, they would need an American rider.

Gagne was the obvious choice thanks to his relationship with Honda, but this will not be a permanent move. At the moment Gagne will only be supporting Team Red Bull only at this weekend’s event in Laguna Seca.

Tribute For The Fallen Star

Since the event will be taking place in front of Hayden’s home crowd, the team are planning a tribute for the rider and it makes Gagne’s role all the more poignant. Team Manager for Red Bull, Ronald Kate reiterated the faith he has in Gagne and the significance of the loss of Hayden.

He went further to state that they expect great things from Gagne this weekend. The rider is already familiar with the Superbike he will be riding from his Moto America Superbike days and he has won multiple races at the Laguna Seca course. Undoubtedly all eyes will be on Team Red Bull this weekend both in tribute and recognition of Nicky Lauder.