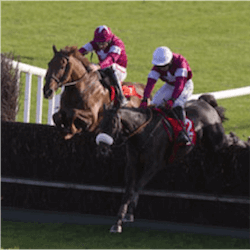 New Zealand jump racing enthusiasts are eager to study the field for Europe’s richest event: England’s Grand National at Aintree, coming up on April 08. However, online punters need to reconsider bets, after the withdrawal of three top Irish horses.

The O’Leary brother claim that Liverpudlian Smith has a bias against Irish horses, assigning arbitrary extra weights to them. Smith has denied any favouritism, but he does have a track record of weighting Irish horses with more than they would carry under Ireland’s handicapping rules.

As setting final handicaps is entirely his prerogative, the O’Learys took a stand and decided to withdraw all three of their Grand National nominees, after Smith weighted them almost a kilogram heavier than usual for the 2017 race.

The O’Learys withdrawal means that geldings Don Poli, Empire Of Dirt and Outlander are all out of the draw. 8-year-old Don Poli was previously the ante-post favourite at 14-1, even weighted at 73kg.

10-year-old Empire Of Dirt was the 20-1 joint third favourite along with One For Arthur, The Young Master and Vieux Lion Rouge. The second favourite was another Irish gelding: 9-year-old The Last Samuri. At 16-1, he’s the new ante-post favourite.

New Zealand betting fans will want to keep an eye on Irish 10-year-old O’Faolains Boy, and two French geldings: 7-year-old Le Mercurey, and 8-year-old Vicente. At 33-1, any one of the three could provide an upset in April.

French/US 8-year-old Blaklion ran a very close second to Vieux Lion Rouge at Haydock, so he might be worth a 33-1 flyer in the Grand National too.