All About The Group 1 Goodwood Horserace 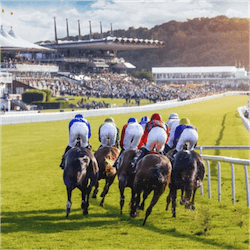 Gearing Up for Goodwood 2017

The Goodwood is a Group 1 thoroughbred horse race for 3 year olds and up. It takes place in May each year at the Morphettville racecourse in Adelaide South Australia. The race itself is run over a distance of 1200 meters under penalty and set weight conditions. The race offers a total prize money of $500,000. In 2016, Black Heart Bart took the honours with Under the Louvre coming in second and Stupido placing third.

Goodwood day is one of the most popular race days of the Adelaide autumn racing carnival. The Goodwood feature sprint is the richest race in the carnival and attracts quite a crowd. The Goodwood is held alongside the Group 3 SA Oaks, the National Stakes and the Group 3 RA lee Stakes. This year, the 2017 Goodwood race will be held on Saturday the 20th of May at Morphettville racecourse.

As a premier sprint race in the Adelaide racing carnival, the Goodwood attracts strong field of competitive gallopers. Before 2007, the race was held under handicap conditions. It then switched over to set weights and a penalty race setup. Lead up races to the Goodwood includes the Group 3 RN Irwin Stakes and the Group 3 DC Mckay Stakes. In 2009, I am Invincible won the DC Mckay before placing second in the Goodwood. The large fields in the Goodwood make the barrier draw particularly important for a horses chances. In the last 32 winners, only four have won from a barrio outside of 13.

Over the years, some big names have led the charge down the Morphettville course including Black Caviar in 2012, Takeover Target in 2009 and Super Elegant in 2004. The leading trainer in the race is Walter Hickenbotham with five wins between 1901 and 1910. Jockey John Letts holds the record for the most wins with a total of five between 1961 and 1984. In recent years, Black Caviar and Platelet both won the Group 1 Robert Sangster Stakes before picking up the win at Goodwood.

In 2016, Black Heart Bart finished runner up in the Group 1 All Aged Stakes in Randwick before heading over to Adelid to win the Goodwood in grand style. Other recent winners of the race include Flamberge in 2015, Smokin’ Joey in 2014 and Platelet in 2013.