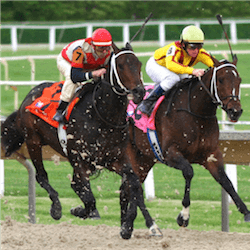 On Saturday the 20th, the who’s who of Australian thoroughbred racing will be heading to the Flemington race course for the annual National Hall of Fame Race day.

Legends of the Australian racing scene are honoured here each year and being inducted is considered one of the highest accolades you can achieve within the industry.

The Hall of Fame is part of the Australian Racing Museum. Through this event they hope to immortalise the greats of the field.

A Recent But Cherished Tradition

The museum officially opened its doors in 1981 but it wasn’t until 2000 that the first National Hall of Fame event was held. At the inauguration of the event, trainers like Bart Cummings and famous horses like Kingston Town and Tulloch were inducted.

Starting at 11:45am, attendees of the event can look forward to nine exciting races. These include heats for the winter races as well as two Andrew Ramsden Stakes races.

Starting off the racing action will be the Vobis Plate for two year olds over 1400m, followed by the 1600m three year old handicap.

Previous Legendary Inductees Into The Hall

Some legendary members that have been inducted into the roll of honour include TJ Smith. This legendary trainer was the king of racing for almost 30 years.

To list all his achievements will take some time but two of the hall of fame horse, Tulloch and Kingston Town were trained by him which pretty much says it all.

No One Is Forgotten

Even horses get special legendary status s shown by Carbine. This horse has won 30 principal races or stakes prizes in his distinguished career. He not only made a name for himself as a racer but also as a sire, leading him to also be inducted into the New Zealand Hall of Fame.

This inclusiveness of all stakeholders is what keeps racing fans coming back to the National Hall Of Fame induction year after year.

The Hall of Fame honours local heroes of the racing industry, keeping their memory alive.