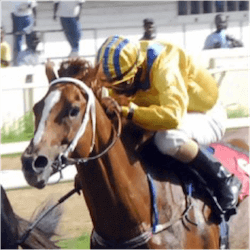 Horse racing enthusiasts saw one of the prime events of winter racing at Flemington on Saturday, at Victoria Racing Club’s Hall of Fame Race Day. The National Hall of Fame is Australia’s highest racing accolade, and Saturday’s race card celebrated the induction of four legendary horses, a jockey and a VRC associate into the elite group.

The Saintly Hall of Fame Trophy was the opening race of the day; a 1400m sprint named after “the Horse From Heaven” ridden so memorably by Darren Beadman. It was won by two-year-old filly Aloisia.

The second race was named after 1965 Melbourne Cup winner Light Fingers, the New Zealand mare whose career included wins at distances ranging from sprints to two-milers. At Flemington on Saturday, the 1200m Light Fingers Hall of Fame Trophy was won by 3-year-old filly Overstep.

The jockey pipped into second place in the photo-finish that decided the 1965 Melbourne Cup, John ‘JJ’ Miller, came back a year later to win the race on Galilee. The duo had just won the Caulfield Cup, and when they netted the Sydney Cup later that season, they became the first and only horse and jockey to win the Triple.

Miller also won the Australian Derby six times, and his Hall of Fame induction was celebrated on Saturday with the 1800m John Miller Hall of Fame Trophy. It was won by 7-year-old gelding Northern Journey; priced at between $101 and $133, he delivered the first big upset of the day.

As of April, 5-year-old mare Winx has been undefeated in 17 consecutive races, and her induction into the Hall of Fame was celebrated with the 1600m Winx Hall of Fame Trophy, won by 3-year-old gelding Guangzhou.

Winner of the first two Melbourne Cups ever run, gelding Archer was a champion 19th-Century stayer and the last horse to be honoured at Flemington’s Hall of Fame Race Day. The 2000m Archer Hall of Fame Trophy, the eighth and penultimate race of Saturday’s card, was won by retiring 10-year-old gelding Extra Zero. At $26.70 to $33.40, he provided another windfall for lucky punters.