Hamilton Not Surprised at Rosbergs 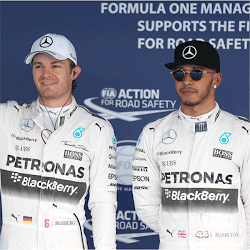 Lewis Hamilton and Nico Rosberg may have had a strained relationship in recent years, but the racing legends have a long history that goes back to when they were teenagers. Rosberg and Hamilton met when both were involved in kart racing, and have been teammates at Mercedes since 2013. Their friendly relationship floundered under the weight of their rivalry to be world champion, but they have remained cordial to one another and Hamilton has been outspoken about Rosberg’s decision to leave, backing him all the way.

No Surprise for Hamilton

Hamilton has claimed that Rosberg’s decision to quit racing wasn’t a surprise to him, and that he expected the German to retire once he had a World Championship title under his belt. Despite the fact that the two were no longer on friendly terms, Hamilton has said that he will miss their fierce rivalry and that Rosberg pushed him to be a better driver.

Hamilton added that the sport would also miss Rosberg, and it was a pity the German was leaving the track, as now he couldn’t try and win back the title from him in 2017! F1 fans are also sure to miss the rivalry these two brought to the sport, and the skill and showmanship the two Mercedes drivers employed in order to beat one another.

Rosberg made his announcement only 5 days after winning the World Championship title at the FIA prize giving gala, where Hamilton was heard telling reporters that it was the first time the driver had won the title in 18 years, so it wasn’t a surprise to him that he’d decided to stop. Hamilton completely understood where Rosberg’s decision came from and said that he knew the driver has a family and daughter he wants to focus on, and that Formula One can often get in the way of life as it has very rigorous demands.

Hamilton has said that it will be very strange and rather sad not to have Hamilton on the team in 2017, and that he wishes him all the best. He respects his teammates decision however and agrees with his principle of going out on top when you can.

Interestingly enough it had actually been Hamilton’s future with Mercedes that seemed to have been in the spotlight in the last few days, after he’d ignored team instructions in Abu Dhabi and forced his teammate to slow down, in an effort to make him lose points. All of this is now in the annals of the past, as Rosberg claimed his World Championship title and has left F1 for good, leaving the track wide open for Hamilton. In Hamilton’s view he is unphased by who takes Rosberg’s place, he’s there to race.