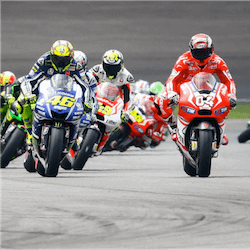 Gearing Up for The 2017 British Moto GP

In the late 70’s, the UK found that they had loads of airstrips that had fallen into disrepair after the Second World War. In attempting to find an alternative use for these tracts of land, the British racing industry found its start.

Most notably, an airfield outside of a little town called Silverstone found fame when it was developed into one of the most respected racing tracks in the sport today.

Silverstone is also the current official home of the British MotoGP. The first MotoGP was held here in 1977. Before that, the only British leg of the world Motorcycle championships was in the equally legendary Isle of Man.

The Isle of Man tenure was short lived, however, after rider Giacomo Agostini boycotted the event when his friend and fellow rider Gilberto Parlotti died in a crash.  The Moto GP is set to start the 25th of August and run until the 27th.

The British Moto GP was first held in 1977 at Silverstone but the event was moved again in 1987 to Donnigton Park. Its stay here lasted until 2009 when Silverstone once again became the home for the event.

In 2015 plans were announced to move the event to the specially constructed Circuit of Wales track, bit so far the construction is still on going and Silverstone will remain the MotoGP course until 2018.

This means that you may very well be catching a historic moment, as this may be the last time we see the MotoGP at Silverstone for a few years.

Throughout the Moto GP history and even across all racing classes, from 125cc to the 500c bikes, Honda has always stood out as a manufacturer of note.

Along with Aprilia and Yamaha, you have the trifecta of the best in Motorcycle hardware. These three companies have essentially dominated the sport since the British Moto GP’s inception.

Other notable companies include KTM, Kalex, Derbi and Suter.

The most celebrated rider in the sport currently is the legendary Valentino Rossi who has won the Moto GP alone 6 times. Jorge Lorenzo is another notable rider who took the gold in 2010, 2012 and 2013. Casey Stoner from New Zealand took the title in 2011, 2008 and 2007.

The favourite this year is Marc Marquez with Honda. The rider has had a great season so far and most bookmakers will give you odds of around 1.3 to 1.5 for a win.

Andrea Dovisioso is another favourite with most bets standing at odds of 5 or 6 for a win.

Maverick Vinales with Yamaha will also be offered at the same odds. Valentino Rossi is one of the older riders and gets odds of around 10 to 1 for a win.

The outliers are Daniel Pedrosa with 21 to1, Jorge Lorenzo at 200 to 1 and Johann Zarco at 300 to 1 with most bookmakers, and you can check out what’s on offer easily at top rated sites like Sportsbet.