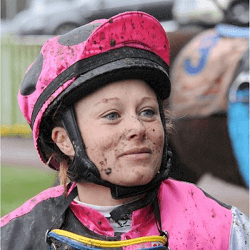 The horseracing world is reeling after Riveton jockey Rebecca Black’s shock death after a fall in a race at Gore. Black passed away after she fell off her horse during race 8, just after 4pm on Sunday.

After Black’s tragic death the Tapanui Racing club meeting was abandoned and police and coroners took over the scene. It’s understood that the Racing Integrity Unit’s stipendiary stewards also opened and adjourned an inquiry into the incident.

Blacks death came after her horse, Point Proven, and Misscattlecreek, ridden by Terry Moseley collided and fell onto the track, with around 700m still to run. Moseley did not suffer any serious injuries, but Misscattlecreek was euthanized on the scene.

Rebecca Black was a respected jockey and her untimely passing has rocked the race world. The 40 year old was very popular in racing circles and in the South Island riding ranks, and many have expressed their sadness of her loss. Mid Canterbury trainer Terrill Charles, a close friend of Black’s said that her loss was immense and he was going to miss her so much. He added that Black was tough and gutsy and that she loved her horses.

Greg Purcell, the Chief Executive of New Zealand Thoroughbred Racing said that Black’s death would be felt by all in the close knit Kiwi racing community and that his thoughts were with Blacks family and children at the time. Two of Black’s three children were at the course on Sunday and unfortunately witnessed the event. Kelvin Tyler, her former husband was also present and was understandably devastated by the accident that claimed her life.

It’s often forgotten just how dangerous horse racing can be, and the risk that the jockeys take is enormous. Before Blacks tragic death on Sunday, the last jockey to have been killed on the track in Ne Zealand was Ashlee Mundy in 2012. Mundy died after a fall at Kurow.

Seven years prior to Mundy’s death a teenage jockey by the name of Sam McRae was killed at Riverton, just n hours drive away from where Black lost her life at Gore.

Black leaves behind a strong racing legacy and she was passionate about passing her considerable skills onto others. In her lifetime she rode 108 winners and came first in the 1993-1994 racing season. She will be remembered fondly by all and will be sorely missed, both on the track and off.