Jumps Racing Under The Spotlight 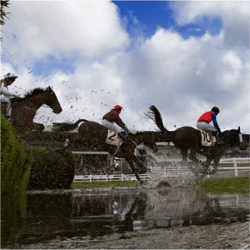 Jumps Racing Under The Spotlight

Jump racing has always been a controversial topic. The sport has been banned in many states in Australia, all except two in fact. Jump racing meets still take place in New Zealand however, and there are a number of working tracks all over the country. Jump racing is notoriously harder on the horses than flat racing is due to the large fences and ditches that the horses have to navigate over at a full gallop. The tracks are also much longer and the weights heavier, with 75kg’s being carried over 6700 meters not unusual. Due to this jumps horse are much older than flat horses in order to be a stronger, more mature animal.

According to groups, there have been seven fatal injuries to horses at steeplechases this year on New Zealand soil. The most recent was at Ta Aroha in August where a horse called Twentythirtyfour had to be euthanized after fracturing a leg. A number of other horses also died due to leg injuries and one to cardiovascular failure. That is not to say that accidents don’t happen in other sports. Many flat racing horses as well as horses in other disciplines all suffer tragedy.

The Jump Racing have responded with statistics which show that jump racing does not have many more accidents than any other equestrian sport in the country. Safety measures are put in place for both the human and equine athletes, and regulations are strictly adhered to.

Jumps have been made smaller and ditches narrower so as to not push the horses to their absolute limits, which in when accidents happen. Each fall is also reviewed by a panel of judges and incident reporters to ascertain exactly what happened, and how it can be prevented in the future.

As yet there are no plans to ban jump racing in New Zealand, and it continues to be a sport on which people place bets and spectate. The sport has a certain fascination whereby many races are ended with a number of horses rider less, or even down as they lie sprawled after a jump. It is also an elite sport, showcasing the thoroughbred athlete at the pinnacle of its abilities. Either way, people watch it and bet on it all over the world. A number of bookies offer betting on jumps races, although much fewer than on flat racing. There is also much less coverage on the sport than on the flat races.

The debate on Jumps Racing has raged for years, never being as strong or as hotly contended, as it has been this year in 2016. The high rate of equine deaths and injuries has put it back into the spotlight, a place where many of its trainers and owners don’t really want to be.