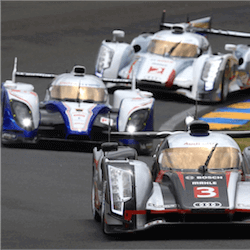 Two New Zealand drivers along with their German teammate have won the 24 Hours of Le Mans race in a spectacular comeback that no one saw coming. Porsche drivers Earl Bamber and Brendon Hartley along with their German teammate Timo Bernhard ran into mechanical problems forcing them in to the pits for over an hour and a half. When they finally got onto the track again, the team found themselves in second-last position.

Thankfully for the Porsche team, all other LMP1 cars started to run into mechanical problems themselves. This allowed the factory Porsche 919 Hybrid to slowly make its way to the front of the pack. With just over an hour remaining in the race, Bernhard managed to negotiate the final stage of the race holding onto first place to take the chequered flag.

Speaking to the press, New Zealand driver, Brendon Hartley commented that Le Mans is one really crazy race. He explained that the team mechanics had worked very hard on Saturday to get the car repaired in the fastest time possible. Together with their engineers, the three drivers pushed the car to the limit, hoping that their efforts would pay off. Bamber, the other New Zealand driver was equally ecstatic about the race win. He said he couldn’t believe that they had actually pulled off such a comeback. Having been in the pits for over an hour and to still come back and win it was an incredible feat.

Bamber said that along with the drivers, the victory was down to the guys in the pits. He explained that without their efficient work, they would not have been able to get back on the track and win the race. This was Bamber’s second victory at the Le Mans race but the first for his teammate Brendon Hartley. The first New Zealanders to win the famous race were Chris Amon and Bruce McLaren back in 1966. It wasn’t until 2015 that Earl Brendon could repeat their success along with teammates Nick Tandy and Nico Nico Hulkenberg

Winning the 24 Hours of Le Mans race helped boost the two New Zealand drivers in their World Endurance Championship effort. By winning the race, the two collected a total of 36 points, which is double the value of a win at any normal round of the Championship.