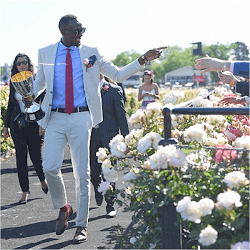 Punters on a number of different sports nearly had their games completely changed when Usain Bolt was very nearly kicked by a New Zealand filly at Oaks Day. Eleonora, a winning Kiwi filly lashed out at the fastest man on earth, who fortunately jumped out of the way, proving his title is well earned.

The horses were on their parade route past the crowd and celebrities when the filly planted a kick directly at the Olympic champion. He managed to leap out of the way just in time, missing what could have potentially been a career-ending move by one fast athlete to another. His co-Olympic medallist John Steffensen was also in the way of the irritable filly, but managed to be a bit further back, pretending to save Usain from harm after he had avoided the kick.

Eleonora is a chestnut filly that has run throughout 2016 and is now in her three-year-old season. She has run a number of races with the Oaks being her first Group One. She won at Flemington a while before, prompting her trainer to enter her into the Crown Oaks. At the Oaks she performed well for her first Group One outing, running third behind Lasqueti Spirit and Harlow Gold.

The pretty chestnut filly is by Makfi and is one of the grand daughters of the legendary mare Ethereal. The Ethereal Stakes are run on Caulfiled day, specifically for young three-year-old fillies over 2000 meters, and this year it was won by Eleonora. The filly has yet to mature and really show her potential, but her owners and trainers think that they may have a group one elite horse on their hands. She has a good pedigree, and a good working attitude, two things that a successful horse needs.

Punters are encouraged to keep an eye on the filly in the future as she is expected to do good things.

A complete outsider, Lasqueti Spirit, won the Oaks. Lasqueti Spirit, a relatively unknown horse, surprised her owners and the other horses by taking the lead early, gaining a few lengths then refusing to stop. She was a 100 to one outsider, which made anyone who had bet on her incredibly happy. Lasqueti Spirit is not known for her pacing, but has great class, so as yet has an uncertain future with regards to racing.

Usain At The Races

Usain Bolt was at the races on the day in order to present the Oaks Cup to the winning jockey, trainer and owner. He pretended to run down the track holding the trophy much to the delight of the crowd. Usain is considered the fastest man alive, but has an equine counterpart on the Australasian continent. Winx the supermare is said to be the equine version of the Jamaican runner with an almost undefeated record.

Usain was an invited guest to the Oaks as a Ladies Day special, showing up in a stylish white suit. Unfortunately, he forgot the golden rule of horses, which is never to stand behind them, and very nearly paid the price.