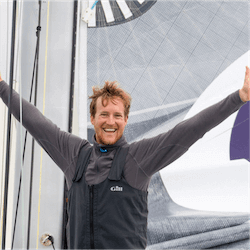 Conrad Coleman, the intrepid New Zealand sailor has become the first Kiwi to finish the Vendee Globe nonstop solo round the world yacht race. Colman’s harrowing experience ended when he finally completed the epic race with a placing of 16th overall. While 16th place might not seem all that remarkable, especially since the front runners finished over a month ago, the fact that Conrad finished at all is nothing short of remarkable.

Unlike most of his compatriots, Conrad faced extreme odds and multiple equipment failure that would have left anyone else stranded. For Coleman, his nightmare race got off to a bad start when he had a fire on board his IMOCA 60 yacht. The fire subsequently disabled his autopilot system and led to the boat being tipped over in large swells. After being knocked over a second time, the main forestay holding up the mast became detached in howling winds of 45 knots.

In the final stages of the race, Coleman was down to his final set of sails, limping along with gritty determination. All of this would be enough to force most competitors to retire. But for Conrad, things got even worse. Only three days from the finish line, Coleman’s yacht was caught in a large storm and lost its mast altogether. With nothing else left to do, the 33-year-old Kiwi used his exceptional skills as a rigger and sailmaker to set up one of the best jury rigs seen in ocean racing history.

Making his way slowly toward the finish line, Coleman was rapidly running out of rations and was officially down to his last survival biscuit. After battling unbelievable odds, Coleman eventually sailed over the finish line in Les Sables d’Olonne in France. He became the first Kiwi sailor to ever complete the Vendee Globe race and only the third to finish the race under a jury rig. As the rest of the world marvelled at his unbelievable resilience, Colman admitted he had left out one vital piece of information.

Speaking to the press, Colman admitted that he had fallen overboard in the Southern Ocean one night. He had been on the boom when the rigging broke and Conrad found himself dumped into the ice sea. Fortunately, he was hooked on at the time. The boat was too far away to get back on board but with a bit of luck Conrad was swept up by a wave and managed to unclip his harness and scramble back on board. This was Coleman’s third successful circumnavigation and he is already planning to do it again, this time in a more equipped boat.